Thanks For Joining Us!
If You Enjoy Our Discussion
Please Consider Subscribing!

Ask Me Why Being a Twin is Not Cute! 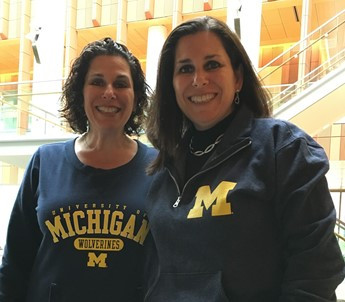 That's me on the right. On the left, is my sister Donna.
And incidentally, we never dress alike, but when in Ann Arbor … Go Blue!

Everyone's first question upon finding out my sister and I are twins is, "Are you identical or fraternal?" For most twins, this is a one-word answer. But, we've never been typical! The doctor who delivered us said we were fraternal because there were two placentas. That was the standard wisdom at the time we were born, although we now know it's more complicated than that. Having been in the genetics field for many years, it was easy to ask a research friend of mine to run our DNA and determine whether we're identical or fraternal. Based on the markers he tested, as well as our common blood type, he estimated that there is a 95% chance that we are identical. This was quite the paradigm shift after 20-odd years of thinking we were fraternal. This was strange to know after all the years of hearing people say "oh, you are so identical," and having to respond "it's not up to you and your opinion. It's a biological fact, and no we're not!"

Take-home message:just because two people look alike does not make them identical. Just think about some of the friends or family you have. You probably know siblings who look a tremendous amount alike, or they would if they were the same age at the same time.

Another favorite question - "Can your mother tell you apart?"* Can you even imagine being the mother of two children and not knowing who was who? This is a particularly irritating question to be asked. And while we're discussing irritating questions, how about this one: "How do you remember which one you are?"Really? Whether or not you can tell us apart does not change the fact that we are individual people, with separate brains, separate bodies, individual personalities, different likes and dislikes, different taste in music, friends, professions, and just about everything else. My twin sister is my very best friend in the world, and always has been. But despite this, we are very different in many ways.

Many different factors, including injury or illness, may influence physical traits. So identical is never really identical beyond the DNA. Don't forget all the little things: differences in weight, posture, choice of hair color or style, or make-up preferences.

Many times people have asked me genetics questions about twins. I'm often asked why one twin has a condition that the other does not. Or why one has a bump in her nose that the other one doesn't have. There are a couple of things to remember here. One is to think about whether they're identical or fraternal in the first place. If they're fraternal, then they can be alike or different in any way that any siblings might be. Secondly, contrary to popular belief, not everything is genetic. A predisposition to a certain illness, for example, may very well be hereditary. But whether the illness will ever manifest itself clinically depends on a whole lot of other things.
So to ask why they don't both have diabetes, for example, ignores the question of what their lives have been like up until now. If they are identical, and they have a hereditary predisposition to diabetes, then what changes the outcome has to do with diet, exercise, obesity, and probably a host of other things we may not even know yet. When you're talking about physical attributes, identical twins will have many that are the same. And the hallmark of identical twins is that they tend to look more alike as they grow older, whereas fraternal twins generally do not. However, there are a lot of physical traits that are not strictly genetic. Many different factors, including injury or illness, may influence physical traits. So identical is never really identical beyond the DNA. Don't forget all the little things: differences in weight, posture, choice of hair color or style, or make-up preferences. The way a person carries herself may have a lot to do with how she appears to other people. Also consider that choice of profession affects her look as well. A professional ballet dancer doesn't carry herself the same way as her identical twin sister who's a coal-miner. The environments in which they work, their diets and amounts of exercise, and their levels of self-confidence will affect their physical appearances. ​

● Just to add insult to the injury of being asked if your mother can tell you apart, try being a mother and having people ask if your kids can tell you apart. Yup - I'm the one who nursed them! And Aunt Donna doesn't answer when you call, "MOMMY!!!!!"

● I have a second cousin who has boy/girl twins. I once asked him if people question whether they're identical. His answer to them - "from the waist up!" I love this because it is both sarcastic and makes the person think about what it means to be identical.

● And my personal favorite, "When your sister hurts herself, do you feel pain?" Ask Donna, she'll say, "Yup, and those three C-sections without the epidural were a bitch!" Sarcasm - works every time!!

When you subscribe to the blog, we will send you an e-mail when there are new updates on the site so you wouldn't miss them.

The Why, Not The How, Of Prenatal Testing
Direct-to-Consumer Genetic Testing

She has written several book chapters, published a number of scholarly articles, and edited a book entitled Ethical Dilemmas in Genetics and Genetic Counseling: Principles through Case Scenarios. This is her first work of fiction. Janice lives in New Jersey with her husband of 29 years, and has three amazing adult children.

More posts from author
Thursday, 30 December 2021 The Genetics of Race and the Problem with Race-based Medicine
Wednesday, 08 September 2021 Usher syndrome - the most common cause of hereditary deafblindness
Saturday, 14 August 2021 Work-Life Balance

The Genetics of Some Common Conditions

Branching Off The Tree

The Importance Of Knowing Your Family History

The Genetics Of Mental Illness

Genetics
Subscribe to our blog Unsubscribe from our blog

Janice Berliner
30 December 2021
The Genetics of Race and the Problem with Race-based Medicine
Genetics
For as long as there have been human beings on Earth, there have been conflicts over territory, religion, property, natural resources, who one should love or marry, how to raise children, and innumerable other topics. But perhaps no issue has been as...
Read More

Janice Berliner
08 September 2021
Usher syndrome - the most common cause of hereditary deafblindness
Genetics
Raise your hand if you know what Usher syndrome is. No? Probably not too many people do, but it happens to be the most common cause of hereditary deafblindness. A couple of weeks ago, I had the incredible pleasure and honor of meeting Nancy O'Donnell...
Read More
VIEW ALL
© 2022
Janice Berliner
Designed by
Elevate Perception
Interviews
SHOP NOW